This is great news for those of you who are making money from the App Store, Installous, a major portal for pirated paid apps from Apple’s App Store, won’t be around anymore. Earlier development team Hackulous announced the closure of Installous on their official Web site.

In the past Installous offered complete access to thousands of paid iOS apps for free for anyone with a jailbroken iPhone, iPad, and iPod Touch. In other words anyone could download an app without having to pay for it.
END_OF_DOCUMENT_TOKEN_TO_BE_REPLACED

In a heist that could have been taken directly out of a Hollywood movie, armed and masked robbers made off with an estimated $1.3 million in Apple products during a heist of an Apple store in central Paris on New Year’s Eve. According to Dow Jones Business News:

“The robbers gained access to the store via a service entrance where they assaulted the store employees, and then “calmly” picked through the boxes of Apple products, taking iPhones, iPads and MacBook laptop computers. The store closed at 1700 GMT (9 p.m. Pacific time) on Monday with a single security guard and a cleaner present, and the thieves entered three hours later.” 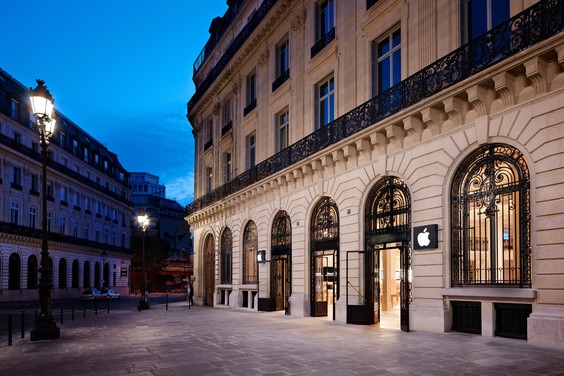 The robbers then apparently loaded the stolen products into a vehicle and fled the scene. According to French news reports, the estimated loss was pegged at around $1.32 million U.S., though the police have not confirmed that amount.

The full changes in the updated developers agreement state

(a) Apple Campaigns. Developer shall receive seventy percent (70%) of the Net Advertising Revenue derived from the sale of advertising on the Developer’s Mobile Properties (“Developer Revenue Share”) net of any applicable taxes as provided in Section 6 of this Agreement. The Developer Revenue Share percentage may be adjusted from time to time at Apple’s sole discretion. Notice of material changes to the Revenue Share percentage will be posted on the Company Portal. “Net Advertising Revenue” is defined as gross advertising revenue recognized through the delivery of ads by Apple less: a) any allowances actually made or taken for returns, credits, cash discounts and promotional allowances; and, b) Agency and agent fees, discounts, commissions and referral fees.

Why Apple has decided to make these changes is unclear, however many bloggers are guessing it could be due to the fact that Apple isn’t pleased enough with the adoption of iAds, furthermore Apple lowered the buy-in for advertisers looking to get into the service a few months ago to $100k from $500k and $1,000,000. Recently Apple removed the per-click fees from ads, now relying on impressions alone, according to the original report.

Developers, are you using the iAd platform inside of your apps?

As predicted by many, Apple just unveiled the next iPad called “The new iPad” Yes really that’s what it is called!

Apple’s new tablet computer has arrived and its ultra-sharp 2048 x 1536 pixel Retina display is enough to set it apart from anyone else. The camera takes breathtaking images. It also has much more powerful guts, with a much faster processor, graphics and more memory. And it’s 4G ready. END_OF_DOCUMENT_TOKEN_TO_BE_REPLACED

One of the biggest subjects throughout the presidential campaign for the Republican candidate has been the jobs that are leaving the United States, well according to new numbers Smartphone applications are helping the industry keep some of those jobs in country. For years, there’s been questions and speculation about just how many jobs Apple’s App Store and similar marketplaces for other mobile and web platforms have created. Well according to new numbers released by TechNet apps have created 466,000 American jobs since 2008.

Of those jobs, the highest percentage (23.8 percent) of the total are located in California. Other app hot spots include New York (6.9 percent), Washington (6.4 percent), Texas (5.4 percent) and New Jersey (4.2 percent).  These numbers include not only jobs created for iOS apps, but also those triggered by the development of apps for Android, BlackBerry, Windows Phone, and Facebook.

Perhaps the politicians should spend more time trying to figure out how to keep these jobs in the country, instead of bitching about the jobs that have already left the country.

Being the avid photographer that I am, I am constantly trying to find apps that will help me improve the images that the iPhone takes, recently I found Snapseed, and have had nothing but good experiences with it, now according to an announcement by the developer Nik Software Snapseed will arrive  on Android in early 2012, at the same time Snapseed has already made its way to the Mac App Store.

Snapseed was voted Apple’s ‘App of the Year’ in 2011, during CES, Michael J. Slater, president and CEO of Nik Software, stated the he was “very pleased to bring Snapseed to the Android tablet market,” furthermore he adds,”Offering Snapseed for Android tablets is a great opportunity for more users to experience the fun and creativity of photo editing and sharing. We worked with NVIDIA to make Snapseed fast and responsive for Android users everywhere.”

For those who develop apps for the iPad these numbers are amazing, since the launch of the iPad in 2010 there have been more than 3 BILLION downloads of apps developed specifically for the iPad.

According to an ABI Research press release, they have estimated that more than 3 billion apps have been cumulatively downloaded since the iPad first launched in 2010, this is an estimated 19% of all iOS App Store downloads, or almost a fifth of all downloads despite the fact that the iPad was released two years after the iOS App Store opened.

According to the numbers released by ABI an estimated 120,000 applications have been developed specifically for the iPad as of the third quarter of 2011. The growth rate of the iPad-specific apps is similar to the explosive start that the iPhone saw when the App Store first opened. It took under 18 months for the iPhone and iPod touch application downloads to 3 billion.

One year ago exactly today Apple unveiled the Mac App Store with over 1,000 apps available at launch. Just like this year, CES was starting to ramp up. Apple stole the early thunder by announcing its app distribution system for OS X.

Steve Jobs told the world that, “We think users are going to love this innovative new way to discover and buy their favorite apps.” As it turns out, he was right.

The Mac App Store went live alongside OS X 10.6.6, and there was plenty of pre-release buzz surrounding high-profile apps like Twitter for Mac. Apple categorized and formatted the Mac App Store nearly identically to the iOS App Store, and user adoption skyrocketed.

Last month, Apple announced that the Mac App Store has served over 100 million downloads, and that figure didn’t even include Lion and re-download numbers. It was estimated that over 10,000 live apps existed in the store at that time.

It’s only taken Apple one year to propel the Mac App Store to the forefront of desktop software distribution. We can’t wait to see what this next year has in store.

It has long been known that Apple has been trying to fight pirated Apps, now they have reached out to AppTrackr, the most popular marketplace for downloading cracked iOS applications. AppTrackr uses their installer tool called Installous to install cracked applications, and makes available applications like Apple’s Numbers, NOAA Radar US, Nike+ GPS, and more to those who jailbreak.

Earlier in the week, the company announced in a blog post that Apple has begun sending notices regarding cracked apps demanding that the company remove these.

Instead of removing these however, AppTracrk has simply moved their servers to countries where there are no copyright laws, furthermore the company has added CAPATCHA code to all outbound links.

For developers it is a good sign that Apple has begun taking steps to prevent piracy of Apps, which really has been a big issue for several developers.

What about you have you had any of your apps pirated, and what are your thoughts on the piracy of apps?